Skip to content
You are here
Home > News > Sir Peter Snell was more than a runner to Academy Coach
NADR - December 17, 2019
0

By Greg Lautenslager, Coach/Director of the National Academy of Distance Running

Most people will remember Sir Peter Snell for his historic bursts down the homestretch in Rome and Tokyo and his world record runs in Wanganui, Christchurch, and Auckland.
I will remember him from the day I sat on his back porch sharing a beer and talking about the weather, politics, gardening – anything but running.
Peter lived about a mile from my wife Debbie (New Zealand 10,000m runner at the 1986 Commonwealth Games) and I in a modest house a block away from my coach Robert Vaughan in Dallas, Texas.  We would see him at orienteering meets; he once shielded me from my young sons after I fell head-first onto a rock and left a bloody gash above my eye.
Peter and his wife Miki hosted a city orienteering meet from their home. Inside, he displayed his Olympic medals and various cups. He was proud, but I knew people who boasted more over their bowling trophies. Having lunch with Peter, Robert, and Arthur Lydiard was more of good chat with friends than a distance coaching summit.
Peter accepted my request to talk at my University of North Texas Distance Running Camp, drove an hour to Denton, delivered a magnificent speech to my runners, showed them his medals, and refused to take a dime – even for his petrol. I heard he scoffed when he received a $50 meal voucher in the mail as a thank you for his efforts.
He and Miki came to our apartment in Dallas for Debbie’s Waitangi Day celebration. They sat with us on a friend’s sofa and watched Lorraine Moller win the bronze medal in the women’s Olympic marathon in Barcelona.  They came to our house in McKinney, Texas, and Peter listened intently to my father-in-law talking about driving a school bus in Hamilton. They attended our “Good Riddance, Lautenslagers” party a week before we moved to New Zealand, and a few years later they cycled to Luke’s Locker for the book signing of my Following the Flame launch tour. Peter bought a book and then sent me emails wanting to know what part of my semi-autobiographical novel was true and how my sons’ running was going.
Debbie and I saw Peter last, two years ago, with a surprise visit while we were in Dallas. They had just returned from a table tennis tournament, where he was victorious. As always we had a great chat, and he always looked at us with his cheery little grin.
My lasting memory of Peter will be one day at White Rock Lake in Dallas watching Peter jogging away in the distance. He was in his 60s and he wasn’t going too fast. But the form was same, this springy, powerful stride no different from the one he used to smash everyone in the world. He was an Olympic Champion, but to me and everyone else that day he was just another good ol’ bloke on his afternoon stroll. 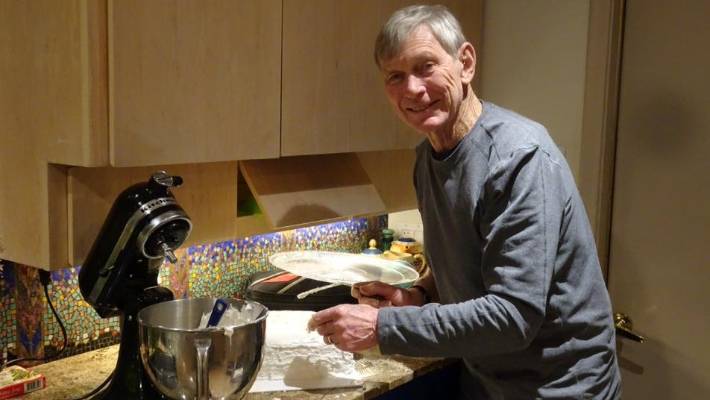